The Simpson Querrey Institute (SQI) hosted Pat and Shirley Welsh Ryan in a recent visit that enabled SQI’s scientists to showcase the broad range of their research.

The Ryans toured the Institute’s downtown Chicago campus, including new space in the Simpson Querrey Biomedical Research Center (SQBRC). The full scope of SQI’s research capabilities was demonstrated, from synthesizing advanced materials for medical and renewable energy applications, to studying their interactions with neurons and stem cells, to performing animal studies and advancing toward clinical translation in regenerative medicine. During the visit, the Ryans toured the Good Manufacturing Practices pilot facility in the SQBRC that will facilitate clinical translation of research at Northwestern.

“I was thrilled to have the opportunity to tour SQI labs with Pat and Shirley and greatly enjoyed experiencing their engagement and interest in the science stories they heard during the tour,” said Samuel Stupp, Director of SQI. “We were honored to host Pat and Shirley; they have had a profound impact on transforming Northwestern into the institution we are today.” 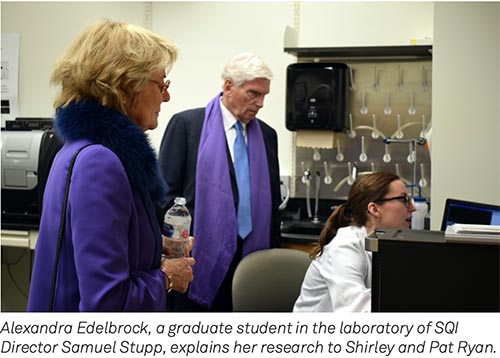 During the Ryans’ tour, SQI faculty members Erin and Wellington Hsu demonstrated their novel techniques for bone regeneration in spinal fusion surgeries. Other researchers from the Stupp lab highlighted strategies for regenerating muscle, cartilage in knee and hip joints, and spinal cord tissue to avoid paralysis. They also shared SQI work on 3D bioprinting to create bioactive constructs, which in the future could be used to template organ formation with anatomically relevant shapes. Finally, scientists from C. Shad Thaxton’s laboratory showcased their development of nanoparticle-based therapies to treat cancer.

In addition to the medical research, students and postdocs from the Evanston campus brought research demonstrations to share ongoing work at SQI’s Center for Bio-Inspired Energy Science.

“This work involves the development of robotic materials that move like living creatures in response to light as well as materials that can generate fuels from sunlight and air the way the leaves of trees do,” said Liam Palmer, Research Associate Professor of Chemistry and Director of Research at SQI. “Advances in these areas could enable development of materials with ability to function autonomously and allow us to more efficiently produce and store chemical fuels on demand.”

The visit also allowed three young researchers to meet the couple who generously supported their graduate school research via the Ryan Fellowship. Former Ryan Fellows, Nick Sather of the Stupp lab and Kaylin McMahon and Stephen Heinrich of the Thaxton lab, were able to personally thank the Ryans for the impact those fellowships had at an important stage in their careers.

“It was cool to actually meet the people who directly funded my research,” said Sather, now a postdoctoral fellow in the Stupp group. “I don’t think that happens very frequently so having the opportunity to show my gratitude to them was fun and I definitely appreciated that.”

Pat Ryan is the former chairman of Northwestern University’s Board of Trustees and served for 41 years as the CEO of Aon Corporation. Shirley Ryan founded and directs Northwestern’s invitational graduate-level Learning for Life series and has been a charter member of Northwestern's Women's Board since 1978. A recipient of honorary doctorates from Northwestern and the University of Notre Dame, she has been appointed by two U.S. presidents to the President’s National Council on Disability and is known for her transformative gift to the Shirley Ryan AbilityLab, a nationally recognized translational research hospital focused on physical medicine and rehabilitation. 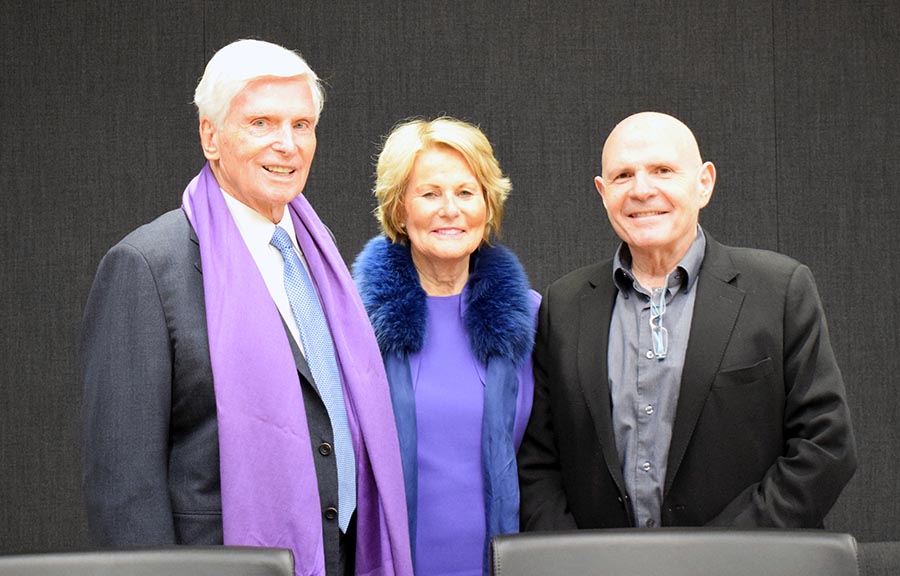 Pat and Shirley Ryan pose with SQI Director Samuel Stupp during a recent visit to the Institute.