Stupp was honored for his pioneering contributions in the areas of self-assembly and supramolecular chemistry. The Nanoscience Prize recognizes lifelong achievement and is awarded each year to highlight and encourage outstanding research in all areas of nanoscience. Past recipients include Northwestern University’s Sir Fraser Stoddart, who won the 2016 Nobel Prize in Chemistry. 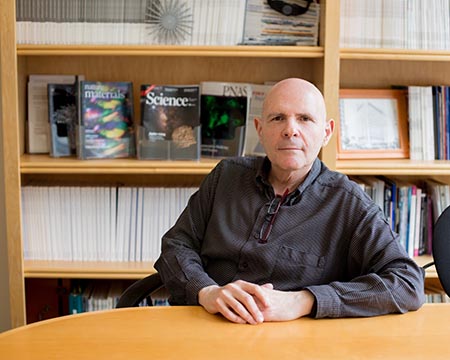 Stupp’s work integrates chemistry with materials science, biology and medicine. The overarching interest of his research group is the development of self-assembling organic materials, focusing on functions relevant to energy and medicine.

One of his landmark achievements was the development of bioactive materials that can signal cells and be used in novel therapies for regenerative medicine. His work has led to the development of supramolecular biomaterials that mimic the natural structures surrounding cells in the human body and activate the necessary signals to initiate the growth of tissues such as bone, cartilage, muscle, blood vessels, and the spinal cord, among others. In the field of energy materials, Stupp has designed bio-inspired supramolecular materials to generate solar fuels, thus mimicking the photosynthetic machinery of plants, and soft materials with photovoltaic capacity to convert solar energy to electricity.

Stupp is Board of Trustees Professor of Materials Science and Engineering, Chemistry, Medicine, and Biomedical Engineering at Northwestern. He directs the Simpson Querrey Institute and its two affiliated research centers, the Center for Bio-Inspired Energy Science and the Center for Regenerative Nanomedicine. He is a member of the National Academy of Engineering, the American Academy of Arts and Sciences, the Spanish Royal Academy, and the National Academy of Inventors, and a fellow of the American Physical Society, the Materials Research Society, and the Royal Society of Chemistry.

Stupp will officially accept the Nanoscience Prize at the 2021 Foundations of Nanoscience Conference (FNANO21) where he will deliver a keynote lecture.