Hiroaki Sai is a research associate in the laboratory of SQI director Samuel Stupp. He first joined the Stupp group as a postdoctoral research fellow in the fall of 2014 after earning a PhD in Materials Science and Engineering from Cornell University in 2013.

Read the interview below to learn more about Sai and his research, which is supported by SQI’s Center for Bio-Inspired Energy Science.

What first sparked your interest in science, and how did you come to focus on materials science?

Back when I was in elementary school, maybe 9 years old, I saw “Apollo 13” and that was my first indication that I wanted to go into research and science. I was very interested in how people engineered things and how they used math and physics to bring the astronauts back, so I thought I would pursue something related to science and engineering — particularly aerospace science and engineering. 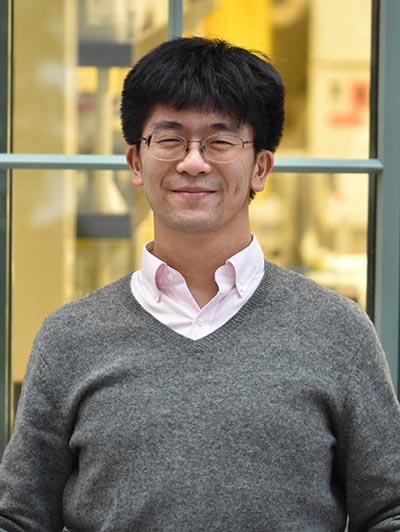 Then I came to college (at Princeton University) and there was this professor that had funding from NASA who was working on next-generation aerospace wings. That turned out to be a materials science professor and since then, I’ve been a materials scientist.

Could you share a highlight from your career before you came to Northwestern?

Right before I came to Northwestern, under my former advisor at Cornell (Professor Ulrich Wiesner), a graduate student in that group and I worked on a painting project.

This was a request from an artist in New York named Kimsooja and an architect, Jaeho Chong. Kimsooja is a world-renowned contemporary artist and she wanted to have an iridescent coating on the surface of transparent plastic windows to be used in an art installation.

So, we needed to develop from scratch how these iridescent polymers would form — basically select the materials and then make them in bulk. We had never made materials that are on the order of more than a few 10s of grams, but for this project we ended up making half a kilogram of successful materials within a deadline of about half a year.

We developed this very exciting coating process that got featured in several video clips, and the installation has been featured in England. It was initially set up at Cornell University and then it traveled across the Atlantic. (Read more about the project from the Cornell Chronicle).

I would say I’m most proud of that. It showed out-of-the-box thinking and it’s something that shows how my materials have been used.

How would you describe your current research interests to a non-scientist?

The Stupp group is really interested in how materials build themselves. It’s called a bottom-up approach to materials synthesis. Most things right now are made with molds, which is top-down. You basically have a mold and then you just press into it, such as in the semiconductor industry, where you get very good at making the same thing all the time.

On the other hand, biological organisms appear from nowhere. There is some sort of manual or information given in the genome that would then be used to build things up and these materials look a little different from one another. They’re not perfect, but it is very good to make structures that have intricate internal structures. We are interested in using some of these design criteria to make things that are functional, and this goes into many of the disciplines in our group — one being solar energy conversion and another being biomedical applications where we try to make materials that look and behave like biological tissues.

You were the first author of a recent publication in the Journal of Materials Chemistry A. Can you explain the motivation for that paper and its conclusions?

There had been some interest in our group and around the world about solar energy conversion, so basically trying to capture light and convert the energy into storable chemicals. Our group made these self-assembled nanoribbons of dyes, called chromophores, that can essentially work as both the light absorber and the electron transporter to drive hydrogen production in water.

So, when the Stupp group developed this in 2014 and published a paper in Nature Chemistry,  they adjusted the in-solution process and they used weak cross-linkers to make gels. In order to use this process, you need to have a loosely packed group of these dye assemblies.

In the new paper, we were interested in using a well-known scaffold from the hydrogels that we can make through polymerization of chemicals to trap the dyes in these gels, so we could create recoverable or reusable hydrogels.

We have taken steps to prove that these gels can actually trap these chromophore amphiphiles, and the resulting material can be used to produce hydrogen in the presence of light.

What are the next steps for this research?

There will be some ongoing work on using a better polymer network, something that is probably looser, for example. On other fronts, there have been students working on improving the dyes, the chromophores, and interestingly we can tune the functions and try to see if we can use these dyes for reactions other than hydrogen because hydrogen isn’t the ideal fuel that you want to store.

In this case, you want to make gasoline. We are far from that, but we are taking steps to create some liquid fuels. There are many directions that we can explore.

You’ve been described as a strong and willing mentor for younger scientists in the group. Is this something that comes naturally to you, and what do you make of that reputation?

I love talking to students. I think this really grew from my response to coming to the United States for college in 2003. Back then, I didn’t really speak English very well and the only way for me to communicate with friends was by doing homework together and then describing my thinking process for equations and problems.

Eventually, it turned out that maybe I could learn English by actually teaching and mentoring students by becoming a teaching assistant. That really helped me get into the academic society and that continued in my PhD training as well as in this group at Northwestern. Luckily, everybody here is brilliant, so I really enjoy talking to students. I get a lot of academic stimulation from that and it helps us come up with new projects.

What do you ultimately hope to accomplish in research?

Visualizing self-assembly processes has been my passion for some time. In graduate school, I worked a lot on electron microscopy as well as x-ray scattering techniques which help to uncover the process by which block copolymers self-assemble.

This part of the material characterization is definitely my passion in science. The engineering part — for example making a gel that can be useful for the world — is also of interest. If there are any applications that I feel passionate about, I’d be very much interested in using my skills to create some devices.