Xiaolei Liu first began working with SQI faculty member Guillermo Oliver as a postdoctoral fellow in 2014 and is currently a Research Assistant Professor in his laboratory. In this interview, Liu describes her research into how the lymphatic system is implicated in heart disease and development, and the path that led her to this emerging field of study.

When did you develop an interest in science and what led you toward a career in biomedical research?

I think the interest started when I was in high school. I remember my teacher showed us some videos of scientists and I was very impressed and really admired the people who were wearing the labcoats and doing research. I dreamed that someday I could wear a labcoat and do this type of work. 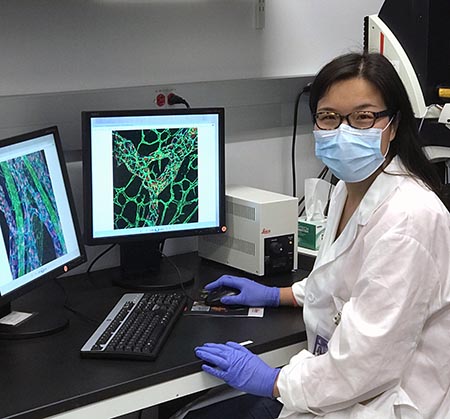 When I started undergrad in China, I was actually studying engineering because my parents thought engineers had a brighter future than scientists. During the first year, I was certain it didn’t fit my interests. At that time, I was more eager to pursue a future in the biomedical field.

Fortunately for me, the school provided a great opportunity for us to change programs by passing a difficult exam. I was very excited so I accepted this challenge and passed it, and then successfully enrolled into the biology department for my second year. I’ve never regretted it and I believe I made a great decision.

What was your graduate school experience like, and how did you get connected with Prof. Oliver’s lab?

I got my master’s degree back in China and worked on using genetically modified stem cells to treat heart disease. That was my first taste of research, and made me certain I wanted to pursue a future in the cardiovascular field.

In doing that, I realized there were a lot of molecular mechanisms for diseases that we didn’t completely understand, so I was committed to studying these molecular pathways. Therefore, for my PhD program, I came to the United States and was in a lab studying the mechanisms regulating VEGFR2 and VEGFR3 signaling, two important receptors for vascular endothelial cells and lymphatic endothelial cells.

During the later stages of my graduate study, I became more interested in lymphatic endothelial cells. The lymphatic field at that time was not very popular because it was thought that there is not much known compared to the blood vasculature. The lymphatic system is taken for granted as a route to transport fluid and immune cells, but there are far more functional roles for the lymphatic system and Dr. Oliver is a pioneer scientist in this field.

One of his major contributions was to find a key transcription factor called Prox1, which is a master gene to determine lymphatic endothelial cells. Without Prox1, mouse embryos die with severe edema. With this groundbreaking finding, this field started to blossom because we had a powerful tool to recognize these vessels. Dr. Oliver’s lab was one of the leading lymphatic research labs worldwide, and I joined the lab because I wanted to get a deeper understanding of the development and function of the lymphatic system.

What are some of the additional roles of the lymphatic system, and what are the potential applications of the group’s work in this area?

In the past several decades, it has been shown that the lymphatic system is important to maintain tissue–fluid balance, immune surveillance and for the absorption of fat in the gut. Traditionally, the lymphatic system has been implicated in in the spreading of tumor metastasis, resolution of inflammation and lymphedema.

In recent years, studies in the lymphatic field have revealed that lymphatic malfunction is responsible for a number of pathological conditions including Alzheimer’s, obesity, glaucoma and cardiovascular disease, which is part of my current focus.

How would you describe that cardiovascular connection to a nonscientist?

I joined Oliver’s lab to study the development and the function of the lymphatic system. In 2015, our lab decided to move to Northwestern University from St. Jude Children’s Hospital, and Professor Oliver now works at the Feinberg Cardiovascular and Renal Research Institute. He is also director for the Center of Vascular and Developmental Biology, where the environment is very enriched with cardiovascular research. Most of the investigators here are very collaborative, friendly and open-minded, so while here I’ve learned a lot more about this field.

More importantly, in the same year there were a series of groundbreaking studies that suggested the lymphatic vasculature could be beneficial in heart disease. I was very excited about those studies, but the mechanisms for how these benefits are achieved are not known. I realized I’m at the perfect spot to investigate this area, as Dr. Oliver’s lab has genetic mouse lines that are valuable in performing this research.

I then focused on understanding how lymphatics could play such a role in heart disease. During this process, I found that they are impactful not just in disease, but also in controlling organ growth, especially in the heart, which had never been identified before. Furthermore, I found some secreted proteins from lymphatics could activate pro-proliferative and survival pathways of heart cells to promote heart growth. This finding is very novel and we have applied the identified secreted protein to ischemic heart injuries and have found these factors are cardioprotective.

Are there any recent publications or ongoing projects you would like to highlight?

I wrote a proposal based on my preliminary data about this novel functional role of lymphatics in heart development and disease and received a Career Development Award from the American Heart Association. That was a major milestone for my study and also a great recognition for my project, which motivated me to continue this research.

I’ve been working on this project for several years now and we have just published a paper summarizing those findings in Nature. In this study, we show that in mice, lymphatics promote cardiac growth, repair and cardioprotection. We also show that a secreted signal produced by lymphatic endothelial cells controls the proliferation and survival of cardiomyocytes (the main cell type in the heart) during heart development, improves neonatal cardiac regeneration and is cardioprotective after myocardial infarction, or heart attack, in adults. This study could potentially produce an effective therapy for improving heart function after injury.

I believe this paper is my biggest accomplishment so far and will help me transition to my independent career.

What do you enjoying doing outside of the lab?

I would say jogging, going to the gym, or watching movies with my husband, but there isn’t too much we can do during the pandemic. The one thing I really enjoy is spending time with my family and I really appreciate the work-life balance they bring. I have two children, a 4-year-old girl and a 1-year-old son. It’s very challenging being a mother and a scientist, but I feel like it’s made me very efficient and makes me appreciate all of the extra time I can spend writing or reading.