Stephen Henrich is an MD-PhD candidate who has conducted research in the laboratory of SQI faculty member C. Shad Thaxton for the last four years. In this interview, Henrich describes his motivation to pursue a career as a physician-scientist and his current work on nanoparticle-based therapies to treat cancer.

What led you to pursue the Medical Scientist Training Program and how did you get involved with the Thaxton lab?

Getting involved in research during my undergraduate years at Simpson College eventually motivated me to apply to MD-PhD programs. I had been interested in medicine for some time and had shadowed quite a few physicians in different specialties. I found it interesting, but it always seemed like there was something missing. When I got involved in research during undergrad, with several different labs, I found out about the MD-PhD track and the career path ended up making sense. 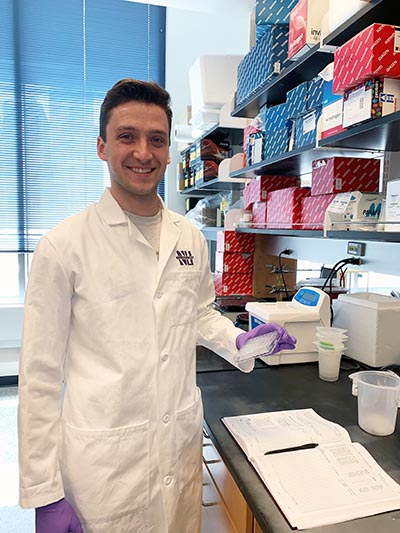 Research was really the missing component for me, so I’ve been most passionate about running a medical research lab long-term in addition to seeing patients. I was able to shadow a few physician-scientists who were actually doing that, and I saw that they had a productive back-and-forth between the clinical side and the basic science that I think really improved both patient care and the quality of their research.

My main interest was in nanotechnology, and I ultimately chose Northwestern because it is arguably the best place in the world for nanotechnology research. I had also been awarded the Ryan Fellowship, which was a nice perk and made the decision pretty easy. I came in interested in the intersection between cancer and nanotechnology, and the Thaxton lab is one of the very few groups that I thought was doing really interesting work in both areas.

How would you explain your research interests to a non-scientist?

My main project during my PhD training has been focused on prostate cancer. We are using nanomaterials that are inspired by nature to try to develop better therapies for prostate cancer, among other diseases. The specific platform that we work with is a high-density lipoprotein (HDL)-mimetic nanoparticle platform. The nanoparticle mimics the surface chemistry of natural HDL particles and is therefore able to integrate with biological systems in the body, where it can function as a therapy, deliver targeted medicines and invoke specific immune responses.

How far along is this research? What progress have you made so far?

The lab has had ongoing work using the particle for cancer for some years now, and we’ve had significant success, for instance, in lymphoma — and that’s progressing toward clinical trials. In addition to lymphoma, we’ve found that there is a subset of cancers that rely directly on the uptake of cholesterol for their survival and growth, but in addition to that, therapeutic targeting of cholesterol can modify cancer progression through other means.

For instance, some immune cells, if they are loaded with cholesterol, are more likely to allow cancer to progress by being permissive to tumor cells. So, you can have immune cells that would ordinarily participate in destroying tumor cells, but if they’re loaded with cholesterol,  suddenly they start to ignore tumor cells and they allow the cancer to progress more rapidly. The bottom line is that cholesterol overload can promote cancer progression through multiple mechanisms, by impacting cancer cells directly or by impacting the supportive cells in their immediate vicinity. We can use our bio-inspired nanoparticles to reduce cholesterol either in the cancer cells themselves or in supporting cells, both of which may lead to improved outcomes.

Do you have any recent publications or ongoing projects you’d like to highlight?

We have a paper on the prostate cancer project that we are in the process of submitting. In this case, we’ve found that reducing cholesterol in a certain type of supporting cell is particularly helpful in treating the cancer. Prostate cancer cells secrete messengers called exosomes which can facilitate communication with nearby cells or cells at distant sites. They’re tiny, nanoscale messengers that can communicate pro-malignant signals.

Our work shows that this intercellular communication process depends upon cholesterol levels in the target supporting cell population, such that if we reduce cholesterol in these cells, we can prevent that communication from occurring — therefore halting the tumor’s ability to transform its environment into one that promotes tumor progression and spread.

What do you enjoy doing outside of the lab?

I’m a fairly big runner, so I like running on the lakefront. Being from a large family, one of my favorite things to do recently has been FaceTiming with my five nieces and nephews, who are all adorable. I’m also a member of an excellent church in Lincoln Park and have enjoyed singing in the choir, participating in small groups, and getting involved in various service projects with them.

How do you plan to use your MD-PhD long-term? Do you see yourself as a practicing physician, a clinical researcher, or a combination of the two?

Research is definitely what I’m most passionate about, so long-term I see myself primarily running a research lab and perhaps seeing patients as well. For instance, I might be an oncologist, run a research lab, and maybe specialize in a subset of pediatric cancers.

What do you consider the highlights of your research career thus far?

A few things stand out. Last year, I was first author of a publication in JACS where we engineered a new class of HDL nanoparticle, and then a couple of months ago I was invited to give an oral presentation at a very large international conference on exosomes (the International Society for Extracellular Vesicles annual meeting).That conference is going to be virtual now, but that was pretty big honor acknowledging some of the most significant work that’s being done on exosomes around the globe. Lastly, being awarded an NRSA F30 fellowship from the NIH and the Ryan Fellowship from Northwestern were also major highlights.