"Deaths from opioid overdose represent a human health crisis of epic proportions. We envision an engineering-oriented approach to this crisis that exploits innovative bio-integrated electronic technologies." 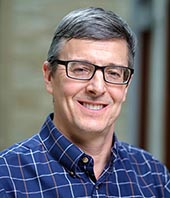 John Rogers, Director of the Center for Bio-Integrated Electronics

John Rogers, director of SQI’s Center for Bio-Integrated Electronics, is co-principal investigator of a project to develop a novel implantable device that can sense the effects of an opioid overdose and then automatically deliver a life-saving dose of naloxone, an opioid antidote.

The device is the size of a small USB thumb drive and can be implanted just beneath the skin in the abdomen, lower back or near the collarbone.

Naloxone is highly effective at treating overdoses, but currently only trained emergency responders administer the therapy. Considering that many overdoses occur when the user is alone or when a bystander fails to recognize the symptoms of an overdose, it is often too late to deliver the antidote by the time emergency medical personnel are alerted.

The automated device under development would overcome these barriers and could be offered to patients with a history of opioid use.

Robert Gereau of Washington University School of Medicine in St. Louis is the other co-principal investigator on the project, which has been awarded funding of up to $10 million over five years through the National Institutes of Health’s Helping to End Addiction Long-term (NIH HEAL) Initiative. More than 2 million Americans currently have opioid use disorders and carry a high risk of accidental overdose.