Tristan Clemons is a Research Associate in the laboratory of SQI director Samuel Stupp and the featured speaker for the upcoming Rising Stars of SQI Lecture on Feb. 4. In this Q&A, Clemons previews his lecture titled “Superstructured Biomaterials Formed by Host-Guest Interactions in Supramolecular Polymers,” discusses highlights from his time in the Stupp group and explains how his experience as an elite athlete benefits his research career.

Can you explain a bit more about your Rising Stars Lecture topic? 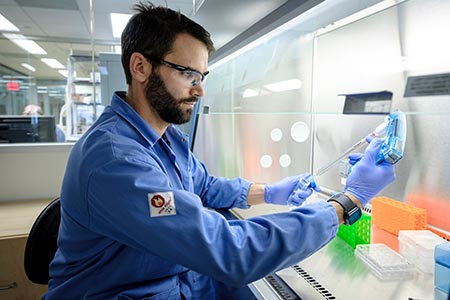 Coming from the background of a polymer chemist, I’ve been really amazed with the opportunities of these peptide amphiphiles that Professor Stupp is famous for, and the dynamic ability of these molecules to move around within or between structures to concentrate.

The key advantage of this work is that we’ve been able to harness the dynamic capability of these materials that self-assemble, and apply it to make a really exciting biomaterial. In the lecture, I will discuss how we were able to use this phenomenon to enhance both the bioactivity and the 3D-printing capabilities of the hydrogel with neuronal cells. We are really excited about these results and the opportunities this material will provide in regenerative medicine applications.

Can you summarize the research you performed in Australia and how you ultimately got connected with the Stupp Lab and Northwestern?

I’ve always been inspired to work on biomaterials. For me, spinal cord injury is something that’s very close to home. I have a very personal story and reason for starting my research career based around that, so my previous work was centered on making covalent polymer nanoparticles for drug delivery applications. We applied those for spinal cord injury, cancer treatment, wound healing and cardiovascular injury.

With this work, I gained a good background in polymer chemistry, but what attracted me to the Stupp group in 2018 was the supramolecular, noncovalent polymerizations and the peptide amphiphile structure that Professor Stupp has pioneered. That’s something that really excited me, and now my work here in the group involves coupling the supramolecular polymers with covalent polymers to see what we can achieve with these hybrid structures.

I’ve seen these structures termed as “hybrid bonding polymers” in your recent review papers (one in the Israel Journal of Chemistry and another in Progress in Polymer Science). Have these materials been your primary focus in the group?

It was great timing to write those reviews because 2020 was the 100-year anniversary of the hypothesis of macromolecules, which is pretty much the birthplace of this idea of polymers and having these large molecules that can have some function. You can’t open your eyes today without seeing a polymer or plastic material in everything we do, so it’s been a pretty amazing 100 years for polymers.

As for my role here in the Stupp group, I think Sam saw my background in polymer chemistry and this was something I wanted to work on. I’ve been very excited about comparing what sort of architectures we can get by including covalent polymers with supramolecular polymers because they give us different things.

Supramolecular polymers give a dynamic ability for these molecules to move around, to concentrate, and to have the structure be almost “living” in terms of how it can change. Covalent polymers give a toughness and strength to the material that we don’t quite have with just supramolecular assemblies on their own.

What do you see as the highlights of your time in the Stupp Lab?

Coming from Western Australia and a relatively small university to Northwestern, it’s like coming to Disney World. We have an amazing group of research scientists here in just the Stupp group alone, but also across Northwestern that we can collaborate with and seek out for new ideas and help if we’re not sure about things.

You also have all the equipment and instrumentation that you could want, and it’s personally been a major highlight to learn some of the cutting-edge characterization techniques. I’ve become somewhat of an expert in cryogenic transmission electron microscopy, which we use a lot to characterize the materials in our group. That’s been great because I’ve been able to collaborate on a lot of projects around this technique, and I still get a buzz out of often being the first person to see how a new molecule is going to assemble.

What are some of the potential applications that you envision for the work you’ve started here?

I’ve been inspired by regenerative medicine and tissue regeneration applications, and I can see a real opportunity with these hybrid bonding polymers that we are starting to work on.

One of the things I’ve been most impressed with is some of the collaborations with the Stupp group around SQI. I’ve been able to work with Professors Arun Sharma, Nathan Gianneschi and Melina Kibbe, who has now left Northwestern but is a very good collaborator of Sam’s work in cardiovascular disease and injury. I’m really excited about some of the translational prospects of these peptide amphiphile materials. I want to make things and have my hands on materials that are going to go into the clinic and help people, and I think these peptide amphiphiles are very close to making that a realization.

You gained some publicity for pulling off a rare double career — simultaneously serving as a research scientist and a goalkeeper for the Australian national field hockey team. What have you been able to apply from your athletic career as a scientist, and do you have any competitive outlets now that you’re finished playing?

It was hard for me to come to the U.S. on one hand, because I left Australia where I was playing high-level sport and doing research, and then you come to a new city with a young family and dive full on into the research. That’s been a learning curve for me to give away one of my loves in hockey to come and do that.

But I think it’s been a worthwhile experience, and my journey in hockey and elite sport has definitely taught me a lot about resilience, leadership and teamwork — and all of those things are important in an academic setting. I think that’s helped me collaborate with other scientists and also mentor younger students in the Stupp group.

Since I’ve been here, I’ve worked with the Northwestern field hockey team as a volunteer assistant coach and it’s been great. It keeps me in touch with the game that I played for a long time and gives me an opportunity to pass on some of the skills that I’ve learned, especially to the goalkeepers. 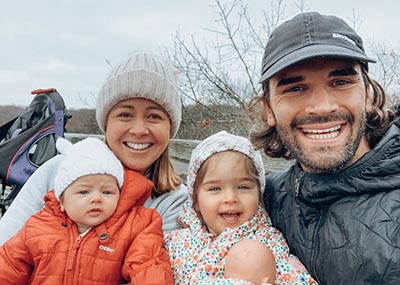 In terms of competitive outlets, you sink it into other passions. I’m a parent of two young kids and there’s not spare time for much else beyond that. I ran the Chicago Marathon in 2019 and that was a big one for me to check off my bucket list, and you could say I’ve become an amateur doubles tennis player as well.

I was planning to ask about your hobbies outside of research, but it sounds like it’s mostly “dad time” for now. How old are your kids?

My wife Claire and I have a 2-year-old, Matilda, and a 4-month-old, Mackenzie (pictured at right in November 2020). It’s been tough this year because we haven’t had the chance to travel, but typically our free time has been centered around parenting but also thinking about how we can explore the greater Chicago area and around the United States. Part of the attraction of coming here for a postdoc was seeing a new country and living in a new city, so all of those things have taken up our time, making new friends and seeing new places.