In a new study, researchers administered a single injection to tissues surrounding the spinal cords of paralyzed mice. Just four weeks later, the animals regained the ability to walk.

The research will be published in the Nov. 12 issue of the journal Science and is available online.

After the therapy performs its function, the materials biodegrade into nutrients for the cells within 12 weeks and then completely disappear from the body without noticeable side effects. This is the first study in which researchers controlled the collective motion of molecules through changes in chemical structure to increase a therapeutic’s efficacy.

“Our research aims to find a therapy that can prevent individuals from becoming paralyzed after major trauma or disease,” said Northwestern’s Samuel I. Stupp, who led the study. “For decades, this has remained a major challenge for scientists because our body’s central nervous system, which includes the brain and spinal cord, does not have any significant capacity to repair itself after injury or after the onset of a degenerative disease. We are going straight to the FDA to start the process of getting this new therapy approved for use in human patients, who currently have very few treatment options.”

Stupp is Board of Trustees Professor of Materials Science and Engineering, Chemistry, Medicine and Biomedical Engineering at Northwestern, where he is founding director of the Simpson Querrey Institute for BioNanotechnology (SQI) and its affiliated research center, the Center for Regenerative Nanomedicine. He has appointments in the McCormick School of Engineering, Weinberg College of Arts and Sciences and Feinberg School of Medicine.

Life expectancy has not improved since the 1980s

According to the National Spinal Cord Injury Statistical Center, nearly 300,000 people are currently living with a spinal cord injury in the United States. Life for these patients can be extraordinarily difficult. Less than 3% of people with complete injury ever recover basic physical functions. And approximately 30% are re-hospitalized at least once during any given year after the initial injury, costing millions of dollars in average lifetime health care costs per patient. Life expectancy for people with spinal cord injuries is significantly lower than people without spinal cord injuries and has not improved since the 1980s. 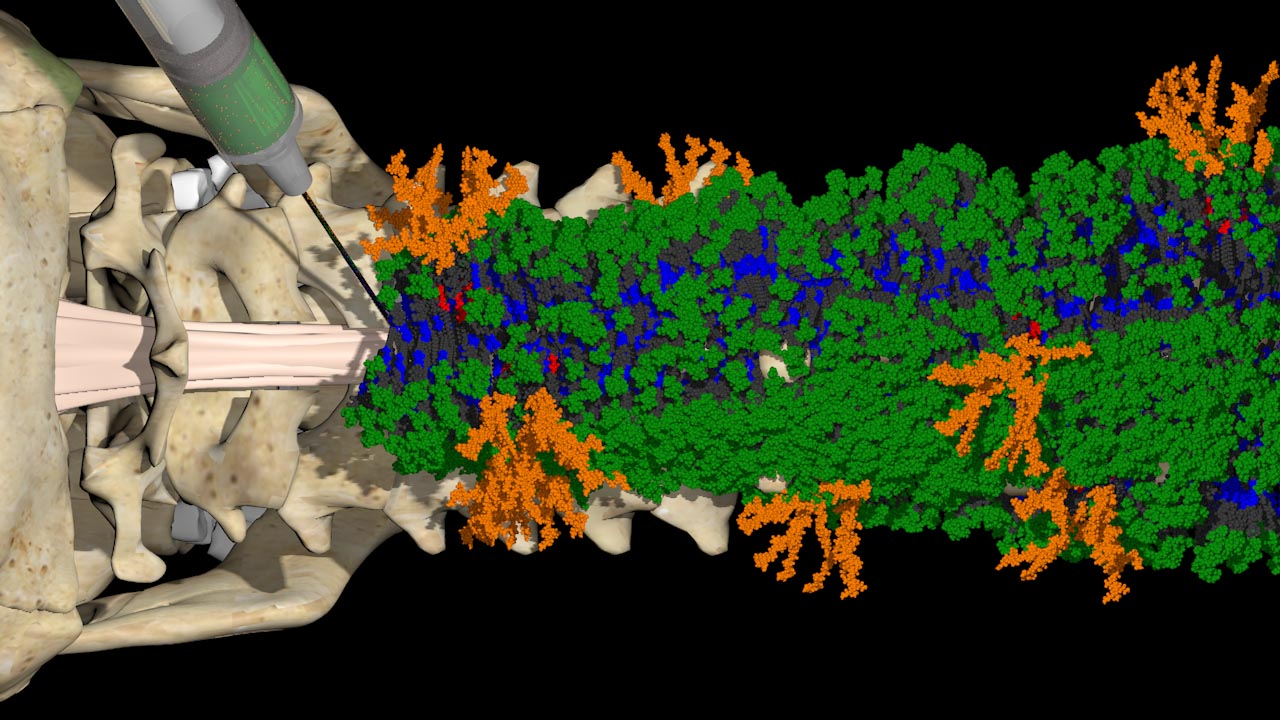 A new injectable therapy forms nanofibers with two different bioactive signals (green and orange) that communicate with cells to initiate repair of the injured spinal cord. Illustration by Mark Seniw.

The secret behind Stupp’s new breakthrough therapeutic is tuning the motion of molecules, so they can find and properly engage constantly moving cellular receptors. Injected as a liquid, the therapy immediately gels into a complex network of nanofibers that mimic the extracellular matrix of the spinal cord. By matching the matrix’s structure, mimicking the motion of biological molecules and incorporating signals for receptors, the synthetic materials are able to communicate with cells.

“Receptors in neurons and other cells constantly move around,” Stupp said. “The key innovation in our research, which has never been done before, is to control the collective motion of more than 100,000 molecules within our nanofibers. By making the molecules move, ‘dance’ or even leap temporarily out of these structures, known as supramolecular polymers, they are able to connect more effectively with receptors.”

Stupp and his team found that fine-tuning the molecules’ motion within the nanofiber network to make them more agile resulted in greater therapeutic efficacy in paralyzed mice. They also confirmed that formulations of their therapy with enhanced molecular motion performed better during in vitro tests with human cells, indicating increased bioactivity and cellular signaling.

“Given that cells themselves and their receptors are in constant motion, you can imagine that molecules moving more rapidly would encounter these receptors more often,” Stupp said. “If the molecules are sluggish and not as ‘social,’ they may never come into contact with the cells.”

Once connected to the receptors, the moving molecules trigger two cascading signals, both of which are critical to spinal cord repair. One signal prompts the long tails of neurons in the spinal cord, called axons, to regenerate. Similar to electrical cables, axons send signals between the brain and the rest of the body. Severing or damaging axons can result in the loss of feeling in the body or even paralysis. Repairing axons, on the other hand, increases communication between the body and brain.

The second signal helps neurons survive after injury because it causes other cell types to proliferate, promoting the regrowth of lost blood vessels that feed neurons and critical cells for tissue repair. The therapy also induces myelin to rebuild around axons and reduces glial scarring, which acts as a physical barrier that prevents the spinal cord from healing.

“The signals used in the study mimic the natural proteins that are needed to induce the desired biological responses. However, proteins have extremely short half-lives and are expensive to produce,” said Zaida Álvarez, the study’s first author. “Our synthetic signals are short, modified peptides that — when bonded together by the thousands — will survive for weeks to deliver bioactivity. The end result is a therapy that is less expensive to produce and lasts much longer.”

A former research assistant professor in Stupp’s laboratory, Álvarez is now a visiting scholar at SQI and a researcher at the Institute for Bioengineering of Catalona in Spain.

While the new therapy could be used to prevent paralysis after major trauma (automobile accidents, falls, sports accidents and gunshot wounds) as well as from diseases, Stupp believes the underlying discovery — that “supramolecular motion” is a key factor in bioactivity — can be applied to other therapies and targets.

“The central nervous system tissues we have successfully regenerated in the injured spinal cord are similar to those in the brain affected by stroke and neurodegenerative diseases, such as ALS, Parkinson’s disease and Alzheimer’s disease,” Stupp said. “Beyond that, our fundamental discovery about controlling the motion of molecular assemblies to enhance cell signaling could be applied universally across biomedical targets.”