"Our therapy targets cancer cells that are dependent upon cholesterol uptake and perturbs the overall balance of cholesterol in the cell. We discovered the cell tries to compensate by turning off pathways it requires to stay alive." 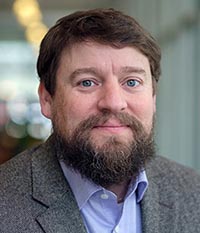 Northwestern University scientists including SQI faculty member C. Shad Thaxton have developed a novel therapy to trick cancer cells into gobbling up what they think is their favorite food — cholesterol — which actually triggers their destruction. What appears to them as a cholesterol-loaded particle is actually a synthetic nanoparticle that binds to the cancer cells and starves them to death.

The research looked at lymphoma cells, but the new experimental drug from Northwestern could be effective in other cancers with a similar appetite for cholesterol such as kidney and ovarian cancer, the scientists said.

The study was published this month in the Journal of Biological Chemistry and builds upon prior work published by the group.

This new therapy may work because the scientists also demonstrated cholesterol metabolism is quite different in target cancer cells from that of normal cells. That enables the experimental drug to selectively attack and kill vulnerable cancer cells while leaving normal cells unharmed.

New therapies are urgently needed to treat up to 40% of lymphomas that are aggressive and do not respond to current therapies. Also, the target of the drug, SCARB1, that is involved in keeping cholesterol balanced in the cell, is present on other cancer cells that share the same appetite for cholesterol.

“Our ability to identify the novel mechanism of cell death gets us closer to translation to the bedside, where we can use this approach in patients with lymphoma who are not responding to more standard therapy,” said co-corresponding author Leo I. Gordon, the Abby and John Friend Professor of Cancer Research at Northwestern University Feinberg School of Medicine and a Northwestern Medicine physician. “These data also provide a rationale to extend these observations to other cholesterol-addicted cancers, such as ovarian and kidney cancer.”

“Our therapy targets cancer cells that are dependent upon cholesterol uptake and perturbs the overall balance of cholesterol in the cell,” said Thaxton, co-corresponding author of the paper and an Associate Professor of Urology at Northwestern. “We discovered the cell tries to compensate by turning off pathways it requires to stay alive. We hope that this novel mechanism may be a blueprint for targeting other types of cancer.”

First of its kind therapy

For the study, Northwestern scientists demonstrated the efficacy of the experimental drug and how it works in human cancer cell models, in animal models, and in cancer cells obtained from patients with lymphoma.

The group will continue development of the drug so that they can apply to begin Phase I clinical trials in patients. They also initiated a process of scaling up production of the drug to conduct studies in larger animals.

About the research team

Thaxton is a member of the Simpson Querrey Institute for BioNanotechnology and his research group is based at SQI. Gordon and Thaxton also are members of the Robert H. Lurie Comprehensive Cancer Center of Northwestern University.

Thaxton, Gordon and McMahon are cofounders of Zylem Biosciences, a startup company hosted by SQI which licensed the HDL nanoparticle technology from Northwestern.

This work was in part supported by grant T32HL094293 from the National Heart, Lung, and Blood Institute, grant R01CA167041 from the National Cancer Institute, both of the National Institutes of Health, a Robert H. Lurie Comprehensive Cancer Center Support Grant and the Catalyst Award Program through SQI’s Center for Regenerative Nanomedicine.