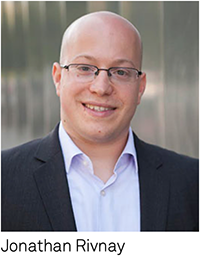 The four-year initiative is supported by a $22 million grant from the Defense Advanced Research Projects Agency (DARPA), which seeks to use the technology to treat combat injuries. The University of Pittsburgh is leading the research effort and Stephen Badylak, professor of surgery and deputy director of the McGowan Institute for Regenerative Medicine at Pitt, is the principal investigator.

“The overall goal of the project is to design a bioelectronic device that would be used as a ‘smart’ wound dressing that would cut the time it takes to heal a complex wound in half,” said Rivnay, an assistant professor of biomedical engineering at the McCormick School of Engineering.

That requires the implanted device to continuously monitor a variety of biomarkers from inside the wound and then deliver specific stimuli at specific times under the direction of artificial intelligence. These timely deliveries of biochemical or electrical signals could accelerate the healing process and switch the wound from inflammatory to anti-inflammatory conditions at an earlier stage. This cycle could be repeated until the muscle rebuilds itself, similar to the way fetal wounds heal without forming a scar.

Typically, when more than 20 percent of a muscle is damaged, a stiff scar forms in place of the missing muscle and often leads to significant, permanent disability, according to a University of Pittsburgh press release.

“With these severe injuries, it’s been drilled into us through all of our training that functional muscle replacement is not possible,” Badylak said in the release. “The sort of technology we’re developing offers hope where there otherwise would have been no hope.”

Rivnay’s role on the project is to work with collaborators from Rice University and Carnegie Mellon University on the bioelectronic aspects of the implant. The group will develop electrophysiological and biochemical sensors to continuously record multiple biomarkers, as well as the actuators that will stimulate tissue regeneration processes when directed to do so by the control algorithms. 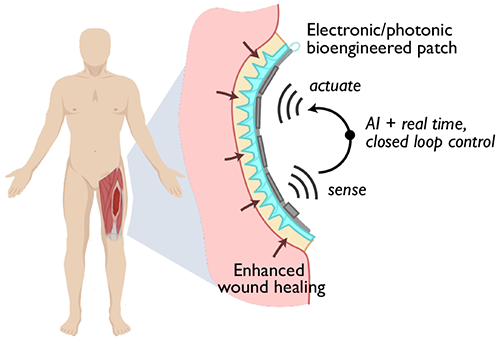 “We’re going to integrate bioelectronic sensors, photonic sensors to monitor biosignals, and optoelectronic devices that will be used to map blood perfusion and oxygenation, as well as to stimulate cell factories that will be used to optogenetically trigger the production of various cytokines, for example, or growth factors to promote tissue regeneration,” Rivnay said. “The main idea is to bring together all of these different exciting technologies and integrate them into a patch that can fit within a wound bed.”

The first two years of the project will focus on device development, while the second half will focus on refining the design for clinical use. Surgeons from Walter Reed National Military Medical Center are offering their perspective from treating patients with major muscle loss, and the researchers are also working with industry partners and the Food and Drug Administration to identify and overcome regulatory hurdles that may slow the path to clinical translation.

In addition to Badylak and Rivnay, the following researchers are co-investigators on the grant: Yoram Vodovotz, Ruben Zamora, Douglas Weber, Bryan Brown, Paul Cohen and Milos Hauskrecht of Pitt; Tzahi Cohen-Karni and Adam Feinberg of Carnegie Mellon; Jacob Robinson, Ashok Veeraraghavan and Omid Veiseh of Rice; Gary An and Robert Chase Cockrell of the University of Vermont; Peng Jiang of the University of Wisconsin; and Eric Elster and Seth Schobel of Walter Reed.