In this interview, Ortega discusses a recent breakthrough from the Kiskinis Lab on amyotrophic lateral sclerosis (ALS) and his plans to continue developing more translational methods to study neurological diseases.

What encouraged you to study science, and what pushed you into neurobiology in particular?

Biology was the class that I enjoyed most when I was a kid. Then, I got completely captivated by science when I started studying biology more deeply and doing research in the lab as an undergraduate student, where I could test a hypothesis and try to push my ideas a little bit further. When you make a hypothesis about something that’s meaningful and then you can validate it, it’s one of the most exciting things that you can do. 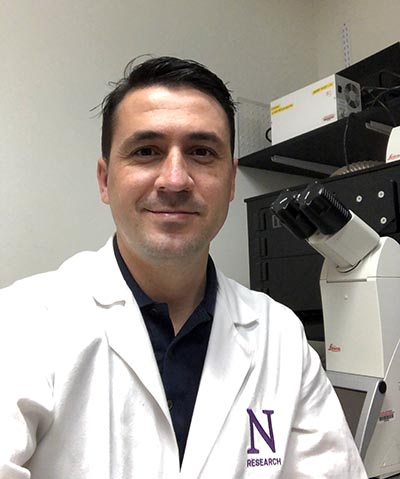 As for neurobiology, I’ve always been curious about the complexity of the central nervous system — the complex functions it controls and how this is achieved. Trying to understand these processes is very challenging and exciting at the same time.

After you received your PhD, can you describe the path that led you to the United States and eventually the Kiskinis Lab?

I first moved to the University of Connecticut to work on fetal human cell models in vitro. My background was in developmental biology in the central nervous system. I did my PhD work in mouse models but I had the chance to move to a lab where we studied human brain development with isolated progenitor cells from fetal material, and that was pretty exciting because using human models makes the transition from the bench to the clinic a little bit smoother.

I was at the University of Connecticut for almost three years and then I moved here to the Kiskinis Lab to work with stem cell systems, which are a very powerful way to do human models in vitro. I wanted to learn about stem cell technologies and Evangelos came from one of the leading labs in this area, Kevin Eggan’s lab at Harvard, so I saw a great opportunity to learn. Over the last five years, I’ve been using human stem cell models to study both neurodevelopment and neurodegeneration.

How would you explain these approaches to a non-scientist and what are some potential applications of your research?

Stem cell models have amazing potential both to study different sorts of pathologies and also to develop new therapeutic strategies. You cannot get neurons from patients, but the stem cell technology allows you to transform cells obtained from patients with minimally invasive methods — such as skin or blood samples — first into stem cells and then into neurons, the main cell type affected by a neurological pathology. More importantly, you can use all of these technologies to produce a lot of neurons from that patient to study the disease in depth and/or test a lot of drugs so you can develop new therapies.

Are you involved in the Kiskinis Lab’s ALS research? Are there specific diseases you are currently studying?

I’ve been involved in multiple projects in the Kiskinis Lab but the first big paper we published after I arrived was in 2018, and that was focused on the development of neurons of the spinal cord and how the epigenetics — or the mechanisms that regulate gene expression — can control the development of these neurons. A second major project that we published earlier this year was about the most common genetic mutation associated with ALS. We made spinal cord neurons from patients with this mutation and identified new proteins and mechanisms that explain how these motor neurons degenerate.

These two studies clearly show how stem cell platforms have a lot of potential to study neurodevelopment and neurodegeneration, but there are still some limitations and the technologies need to improve. With Samuel Stupp’s lab we have developed new biomaterials that better mimic human physiological conditions in vitro, and hopefully we will publish this work soon.

The idea is to utilize novel peptide amphiphiles that the Stupp Lab has developed with specific sequences from the extracellular matrix to improve the cultures of our motor neurons that we derive from stem cells. What we have found is that with this new platform, the cultures look way healthier and the neurons look more functionally mature, which is what we want. I think this will be a very useful platform and other scientists have already shown a great interest to try this in their labs.

How would you describe working with Prof. Kiskinis and the atmosphere of the lab?

The group is usually around a size of 10-15 people and it’s a great, healthy environment. Everyone always tries to help each other and collaborate in each other’s projects in any way they can.

Evangelos is a great scientist and mentor. I really enjoy our regular meetings where we discuss the projects I am working on as well as new ideas and science in general. I am always impressed by his clear thinking and I consider him a rigorous, bright, and open-minded scientist, as well as a great example of the type of group leader I aim to be in the near future.

What future directions do you want to explore in your career?

Overall, my primary research interest is to improve stem cell models and to understand better and move closer to what is actually happening in the patient, inside the body. Most clinical trials in neurological diseases based on current models have failed. This indicates that better translational models are required to develop new and more effective therapeutic strategies.

I want to keep pursuing in vitro platforms using biomaterials. I already did some work with biomaterials during my PhD training, but my recent projects in this area have opened my eyes about something that is really a need in the field — and that’s how to improve these in vitro systems themselves. I think biomaterials are something that can really make a difference, so this collaboration with the Stupp Lab has given me a lot of ideas about what I want to do in the future.

If we can improve these systems, it will ultimately make them more translational to research that could be successful in patients. For example, there is a controversy about using neurons made from stem cells to study degenerative diseases, because they are really immature or infantile, and neurodegeneration usually happens later in life — in your 40s, 50s or 60s.

In other words, the neurons that we create are different compared to these old neurons in the patient when the disease shows up. Thus, something that we can play with is trying to put a “cocktail of signals” in these biomaterials to make these neurons become “older.” I plan to also develop biomaterials that make the environments surrounding neurons more specific to the condition that we want to study, such as adding pathological signals within the platforms to make the neurons “sick,” so that you can identify how cells respond to a specific insult or disease. I am confident that these approaches can help labs to better understand the mechanisms associated with human-specific neurological diseases.