“This opens the door for others to draw ever bolder conclusions about soft matter and molecular self-assembly observable by transmission electron microscopy in liquids." 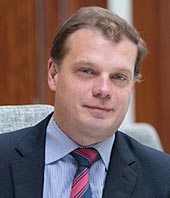 LC-TEM enables observation of how materials and molecules in liquids interact at nanoscale resolutions. This could deeply impact the understanding of nanoscience as a whole and nanoscale biological processes in particular. But a significant limitation of the technique is electron beam-induced damage — a process by which the same high-energy source that captures the images of the objects also fundamentally alters them by “frying” them.

“LC-TEM is a groundbreaking technology in itself, in that the power of moving pictures could eventually bolster our understanding of the world at the nanoscale,” said Andrea Carlini, co-first author of the research and a former graduate student in Gianneschi’s group. “But we also need to be aware of the power of the electron beam used to acquire the images. How much are we changing a sample while observing it?”

In a proof-of-concept study published Oct. 23 in Nature Communications, Gianneschi and co-authors found that MALDI-imaging mass spectrometry (MALDI-IMS) — performed after LC-TEM — could confirm whether the observed changes to structures were actually the result of specific chemical or biological reactions, or if electron beam-induced damage played a role. MALDI-IMS is an analytical technique that can accurately determine the chemical masses of samples.

“The methodology allows for verification that molecules are still intact after the imaging experiment,” Gianneschi said. “That kind of direct evidence has been missing from previous studies on materials, especially those that lack crystallinity.”

For the study, the researchers performed both chemical and biological reactions known to produce specific mass and shape changes in peptides. They observed the shape changes using LC-TEM, and then performed MALDI-IMS to test whether the expected mass changes occurred.

Under commonly used electron doses, the biological materials underwent changes to their mass signatures which couldn’t be attributed to the reactions — suggesting they were altered by electron beam damage. When the electron dosage was lowered, these aberrant changes didn’t occur, confirming that the structural transformations observed via LC-TEM were related solely to the reactions and that the materials remained intact.

“The method can be used for a wide variety of molecules from biomolecules studied here, to polymers and soft matter generally,” Gianneschi said. “This opens the door for others to draw ever bolder conclusions about soft matter and molecular self-assembly observable by TEM in liquids. This kind of real-space, direct imaging of complex nanoscale processes has been long sought after, but requires new methods like this — and many more to come — to be fully realized.”

The authors believe MALDI-IMS could serve as a valuable companion technique to LC-TEM, enabling post-experimental verification of complex interactions. Adding a layer of trust to LC-TEM visuals could significantly improve the real-time study of nanoscale materials that are of interest in human disease progression and treatment.

Gianneschi is the Jacob and Rosaline Cohn Professor of Chemistry in Northwestern’s Weinberg College of Arts and Sciences, professor of materials science and engineering and biomedical engineering in the McCormick School of Engineering and associate director of the International Institute for Nanotechnology. He is also a member of the Chemistry of Life Processes Institute and the Robert H. Lurie Comprehensive Cancer Center at Northwestern University.

Carlini and Mollie Touve were co-first authors of the paper. Touve is a graduate student in the Gianneschi lab and Carlini is a postdoctoral scholar in the lab of John Rogers at SQI’s Center for Bio-Integrated Electronics.